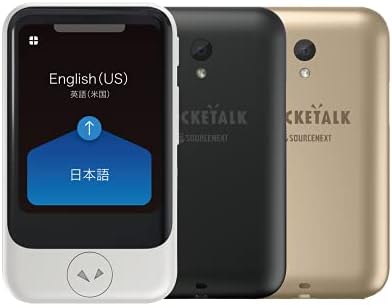 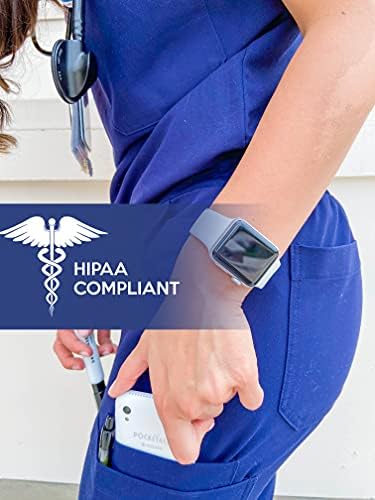 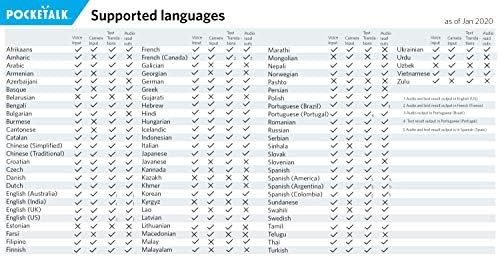 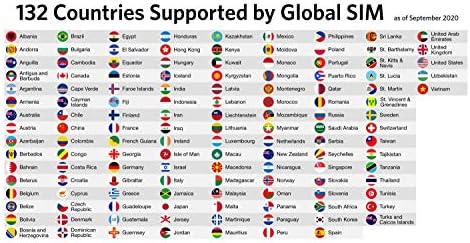 Introducing the highly requested camera to be able to automatically recognize and translate the text, the written word, and signs!

Have you ever visited a foreign country and wished you had a language translator with you? With Pocketalk, a two-way voice translator device, you can travel to 133 countries around the world and communicate with confidence. Using the best cloud-based translation engines, Pocketalk offers the most up-to-date and accurate translations. This smart device continues to learn as you use it. Whether you’re traveling through Asia or backpacking through Europe, Pocketalk is your ultimate travel companion.

Instead of signing up for an expensive mobile carrier plan or hunting down a wireless hotspot, Pocketalk comes with a 2 year built-in data plan, meaning no wifi is needed in order to use it. The newly added camera function instantly recognizes and translates text, the written word, and signs. Equipped with Bluetooth compatibilities, powerful dual speakers and noise-cancelling dual microphones, Pocketalk will pick up every word you speak, even in the busiest of cities or crowded cafés. The large touch-screen makes Pocketalk simple to use and offers users a speech to text display of conversations. Its simple and intuitive interface allows you to select languages and adjust any settings with a few taps.

Earlier this year, Pocketalk committed to donating 600 units to first responders and medical providers in response to current health crisis. However, due to widespread interest and overwhelming response to the Relief Program, an additional 250 units were donated resulting in over 850 Pocketalk Voice Translators in 41 States across America.

“During multiple calls, we have been able to effectively and effortlessly communicate with our patients using Pocketalk,” says Joshua Berman, an EMS with the Commack Volunteer Ambulance Corp in Commack N.Y. “What normally takes us 20 minutes to call up our medical control and secure an interpreter now takes us 20 seconds.”

Pocketalk makes a great study companion whether you need to practice your pronunciation or spot check a quick translation. There’s also a role play feature to learn English & Chinese with more languages to come.

“But beyond helping the traveler lost in translation, Pocketalk is also a great device for language learning and language practice. I’ve been using it to translate words I am unfamiliar with by speaking into it, which gives me both a practice in pronunciation and helps me acquire new vocabulary.” – Foreignlanguagecollective

Truly immerse yourself in the culture without the fear of not being able to communicate in the same language. Pocketalk is built with a conversation in mind making it the perfect travel companion as you travel off the beaten path.

“Bought this for my parents (finns) for traveling purposes. They speak some English, however limitedly. They’ve been just fine with their limited phrasing before but now their travels are expanding to countries where not everyone speaks English. Tried it with the languages that we know of and it works great! They like it, it’s a good backup/failsafe for travels” – Sina

Dependable Real Time Translator : Accurately translate up to 82 languages and dialects in the palm of your hand using the best transcription and translation engines in our library. With frequent software updates, the latest in technology is always at your fingertips
Camera & Image Translation : Read signs, menus and the written text in a snap. Pocketalk camera takes a photo and the large touchscreen displays translated text directly on top of the image along with an optional audio translation.
Translate Anytime Anywhere : Pocketalk S comes with a complimentary 2-year LTE cellular data plan for usage in over 130 countries. With wider mobile bands than Pocketalk Classic, expect improved connectivity no matter where you travel. Note: Internet is needed for translation and it will not work offline.
Added Security: With PIN locks and ability to set timed automatic history deletion, you’ve can translate with the ease of knowing your conversations will be protected.
Realtime currency, length, weight and temperature conversion as well as a practice pronuncation mode & added security measure makes Pocketalk the translator of choice, as seen on the cover of Newsweek, Rolling Stones, CNET, Wall Street Journal & many more

There are no reviews yet.

Added to wishlistRemoved from wishlist 0

Buy Now
About us

A-besigheid.com is a participant in the Amazon Services LLC Associates Program, an affiliate advertising program designed to provide a means for sites to earn advertising fees by advertising and linking to Amazon.com

This website uses cookies to improve your experience while you navigate through the website. Out of these, the cookies that are categorized as necessary are stored on your browser as they are essential for the working of basic functionalities of the website. We also use third-party cookies that help us analyze and understand how you use this website. These cookies will be stored in your browser only with your consent. You also have the option to opt-out of these cookies. But opting out of some of these cookies may affect your browsing experience.
Necessary Always Enabled
Necessary cookies are absolutely essential for the website to function properly. These cookies ensure basic functionalities and security features of the website, anonymously.
Functional
Functional cookies help to perform certain functionalities like sharing the content of the website on social media platforms, collect feedbacks, and other third-party features.
Performance
Performance cookies are used to understand and analyze the key performance indexes of the website which helps in delivering a better user experience for the visitors.
Analytics
Analytical cookies are used to understand how visitors interact with the website. These cookies help provide information on metrics the number of visitors, bounce rate, traffic source, etc.
Advertisement
Advertisement cookies are used to provide visitors with relevant ads and marketing campaigns. These cookies track visitors across websites and collect information to provide customized ads.
Others
Other uncategorized cookies are those that are being analyzed and have not been classified into a category as yet.
SAVE & ACCEPT